When I first got into this business, I was immediately struck by the enigma that is a real estate team. No matter how closely teams resemble one another on paper, real estate teams will always vary in terms of production. Take two teams of five agents each, and even though experience level or age or any of those factors may match up perfectly, one team will still produce an average of ten home sales per agent in a given year while the other may only produce five. Now I ask: If you could somehow figure out how this successful team achieved such high sales, would you do it?

What we’re talking about here is almost like body building. What does it take to win a body building contest? Well… I’m not completely sure but I do know that if you’re going to create a high performance body, you better be committed to it and willing to the pay the price. For body builders, that probably means countless hours in the gym and careful monitoring of their food intake. While real estate success may not require you to put down the sweets and hit the weight room, building a high performance team takes just as much drive, dedication and willingness to change. Most agents will never build such a high performance team because they don’t put in the effort that’s required. Growing is not the easiest endeavor; in fact, it’s oftentimes downright uncomfortable. As the saying goes: No pain, no gain.

So what are the obstacles standing in the way of high performance team success? Here are the most common complaints:

Many agents use these “excuses” as reasons why they shouldn’t join a team. Well, that’s just good news for you because now you’ve got less competition to worry about. As long as agents don’t want to jump across those hurdles, you will enjoy increased market share. The secret is for you to acknowledge these complaints and push on anyway. (Remember that whole “no pain, no gain” thing I mentioned?) Think of these obstacles as your weight room reps; overcoming each one makes you stronger and more likely to become a high performance team.

This method has worked for my team for the past five years. Last year, we averaged 40 home sales per agent. In our market, that’s more than ten times the average agent sales. The results are real. So how do you increase your sales with the same amount of agents as other teams? You focus on becoming a high performance team, acknowledge the stumbling blocks in your way—like those five common complaints listed above—and keep moving forward regardless. 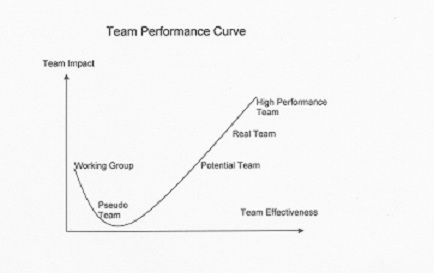 From “The Wisdom of Teams: Creating the High-Performance Organization” by Jon R. Katzenbach and Douglas K. Smith

In The Wisdom of Teams: Creating the High-Performance Organization, authors Jon R. Katzenbach and Douglas K. Smith describe the difference between certain types of teams. For instance, a “Team of Name” is very different from a “High Performing Team.” The Team of Name might be 4 agents who share marketing costs to advertise their brand, but they all do their own separate business and lack the cohesiveness of a real team. Conversely, the High Performance Team will have clear goals, accountability, selfless attitudes, and core values that work to create the kind of high performance group all real estate teams should be.

If you decide you want to be part of such a high performance team, then be willing to make sacrifices and know that the road to success is lined with obstacles, complaints, and limitations that must be overcome. The first step is to learn how high performance teams operate, and acquiring this knowledge will take time. But successful team building is a constant process, and if you go in recognizing this, then you’ve already started on the path to ultimate team success.