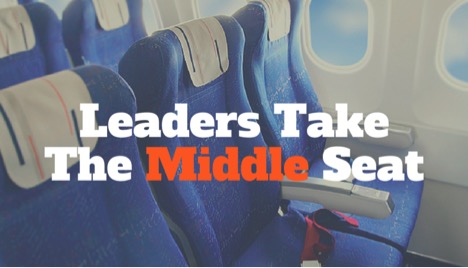 Where you choose to sit on a plane says quite a bit about your leadership tactics.

Southwest Airlines has a unique seating arrangement for its travelers. While many major air carriers assign individuals a specific seat on their planes, Southwest simply gives it’s travelers a boarding number based on when they check-in. Then, passengers board in numerical order and they get to pick their ideal seat. Naturally, the window and isle seats usually get selected first.

Rarely does someone choose the middle seat.

Those who pick the nearest window seat are the dreamers. The world needs those who dream up new ideas, but always thinking with your head in the clouds isn’t conducive to handling everyday situations. When you take the window seat, you are effectively saying that it does not matter what’s going on around you. Leaders can’t think like that.

Those who snatch up the isle seats are often thinking about their own needs first. Isle passengers are the first ones to stand up and fight for the exit door when the plane pulls up to its gate. Often, they stretch their legs into the isle, giving themselves more legroom but making it more difficult for those around them to navigate the isle. Leaders can’t operate like that either.

The middle seat is the bridge that spans the gap of the opposite ends of the spectrum, from those who only have their heads in the clouds to those that only care about themselves. In giving up a great view and by letting others have some extra space, the leader puts the priorities of other people above him or herself. This is especially characteristic of being a humble leader – someone who put the successes of others first and takes responsibility for any and all faults suffered by the team.

It is important for leaders to be humble. As William M. Lambert, the CEO of MSA Safety, Inc., says in a recent Wall Street Journal article, “As a leader, you need to have a strong ego. But you can’t have a big ego.” And choosing to sit in the middle seat not only means you don’t have a big ego, it also shows that your ego is so in check that you are willing to let others have what they want first.

While some people are just born with leadership qualities, other leaders require years of training and practice. Regardless of the route taken to attain leadership status, take this analogy as a cue that all leaders must have a sense of humility in their arsenal of professional development skills. The next time you have the opportunity to put the needs and wants of others around you first, make sure you take it. It’s not only the right thing to do, but it’s also the thing that great leaders do.

No one receives praise or thanks for doing things that are for his or her own benefit. Instead, gratitude is bestowed upon those who put others first – leaders who choose to take the middle seat.

Nico Hohman is a Tampa-based real estate pro with NextHome Discovery who works on renovation and rehab properties. Learn more about Nico at hohmanhomes.com or connect on Twitter: @thenicohohman.