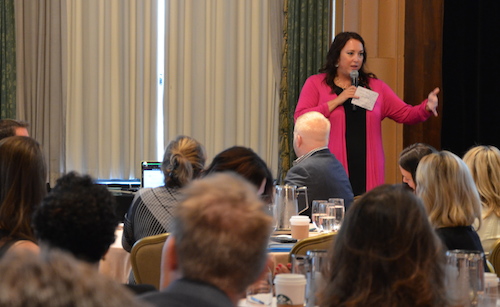 When Elizabeth Mendenhall, 2017 president-elect of the National Association of REALTORS®, visited YPN’s Leadership Retreat today, she didn’t go easy on them. In fact, she told them they needed to step up to leadership positions beyond their young pro networks and become wonks.

Now, Mendenhall didn’t always see the path to leadership in this way. She told a story about her journey to the NAR leadership team, which led through her local and state associations. She remembered being asked to serve on a legislative committee and immediately rejecting the idea: “I was on the professional development side. I was sitting in the strategic planning meetings,” she said. “I don’t like that [legislative] stuff. I could care less who the senator is from the ninth district.”

Mendenhall, now CEO of RE/MAX Boone Realty in Columbia, Mo., said she saw a lot of similarities between her start and the YPNers in the room: “I would venture that a lot of you in this room are not sitting on the legislative committee,” she said. “You’re not sitting on the conventional finance and lending committee.” Mendenhall said she understands the desire to focus on communications, branding, and other association pursuits, but also asked members of YPN to recognize the importance of the political and legal issues surrounding their chosen profession. “None of this matters if we don’t have an industry where people can buy and sell homes… a single piece of legislation can change this industry overnight.”

The annual YPN Leadership Retreat is tailored to incoming leaders of local associations, and Mendenhall acknowledged that the next 18 months would be an exciting whirlwind of activity for attendees who will serve as local YPN chairs. But after that, she said, “It’s time to move on.” She highlighted YPN involvement as a useful entry point to greater responsibility within the organization, but that room must be made for new leaders to enter. “Somebody else sees you there and says, ‘I can do it too.’”

Still, too few YPN leaders are moving up, in Mendenhall’s estimation. “I was disgusted when I went through the applications for vice chair positions,” she said, noting that the lack of young professionals in the group could be attributed to both reluctant applicants and an association that might not be doing enough to encourage them to apply.

But just getting involved isn’t enough. Mendenhall again revisited the need to have more young people on policy-oriented boards. She told attendees that’s where the opportunity for real advancement lies, as she learned when she was a volunteer leader for her state association. “Yeah, it’s scary. Yeah, it’s daunting,” she acknowledged. “It’s a little bit more challenging but it’s absolutely worth it… You definitely get more than you give.”