If you want to browse the Web on your iPhone or iPod Touch (or the upcoming iPad), the only option is the built-in Safari browser because Apple, until now, won’t approve other browser apps in their iTunes store.

Opera, hoping that Apple will change their policy, has developed a version of the Opera Mini browser for the iPhone and they’ll showing a preview of this iPhone App during the Mobile World Congress that happens in Barcelona next week. 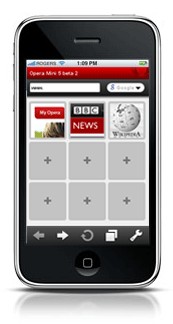 An email from Opera PR says:

“We are thrilled to offer journalists and partners an exclusive preview of Opera Mini for iPhone during the year’s biggest mobile event,” said Jon von Tetzchner, Co-founder, Opera Software.

Safari vs. Opera for iPhone

According to a Reuters article, Opera claims the Opera Mini for iPhone offers up to six-times faster download speeds than Apple’s own browser, and up to 10 times smaller data traffic.

The Opera Mini for iPhone will only be shown to members of the press but Apple will have to approve the app for everyone else to experience Opera on their iPods and iPhones.

That may not happen anytime soon as Opera is yet to submit their Opera Mini iPhone App to the Apple App Store for approval.