If “a stitch in time saves nine,” does a market that corrects itself frequently save itself from over-correcting?

We’ve been told that slow and steady growth is the safest path for an investment. Real estate markets that follow a moderately increasing appreciation path are the rock-solid investments that provide safe harbor from volatile equity swings.

And yet, it’s worthwhile to examine the counter-intuitive possibility that just the opposite is true. What if markets that slowly and methodically gain steam are actually the most likely markets to eventually over-correct, creating far greater overall volatility for their investors? What if markets whose ups and downs are fairly regular actually make for a less-risky long-term environment by keeping their investors engaged?

With real estate prices in the U.S. gaining significant steam again, the talk of “the next bubble” is inevitable. Annual home price appreciation is currently above 7 percent, and the quick run-up in prices leads some to believe a sharp downturn in prices is likely to follow in the coming years. Historical statistics, on the other hand, point to another possibility. 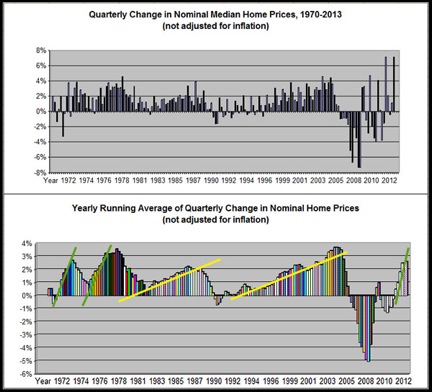 Looking at simple quarterly price changes might make an average consumer see the current market as overheated and volatile. By blending the quarterly pricing reports in the first chart into one-year running averages in the second chart, though, we get a more fluid look at home pricing trends without the seasonality issues.

What you’ll see in the second chart are nominal median home prices–they haven’t been adjusted for inflation. We’re simply seeing how much home prices went up and went down over the past four decades. (Home owners making selling decisions rarely make conscious inflation-adjusted decisions about their home. The home’s price is X, the mortgage balance is Y, and the seller wants to know that the proceeds will be Z.)

There are two times during those 40 years where a downturn was so significant that it created nominal home price depreciation for a year or more.  The first was in the early 1990s, and the second was our most recent downturn that started in the late 2000s.

The rate of home price appreciation today looks a lot more like 1972 or 1976 than the two more recent price run-ups that ended in nominal depreciation.  The trend lines for the 1970s spikes were sharp, and they were followed quickly by slowdowns that didn’t put home prices into depreciation–they merely brought them back to earth for a bit before the next growth period.

The pricing growth that we saw in the 1980s, and in the 1990s/2000s, however, had a very different look.  The incremental gains in appreciation percentage were significantly smaller. These two slow-growth periods built on themselves for extended periods of time, in a way that may have allowed investors to become complacent. Home prices rose every year, and the trend had been happening for so long and so uniformly that the memory of the last correction was far behind.

Could it be that when pricing spikes and settles quickly and often, it actually creates a safer long-term environment for home owners? The short-term peaks and valleys don’t have a huge effect on the home owner who plans to stay in the same location for 10 or more years. As long as the overall trend is positive, a few good years and a few flat years are just fine.

Meanwhile, investors who bank on a constant appreciation trend may find themselves falling off the back end of the kind of slide we saw in the late 2000s. As they over-leverage and over-invest in a market that hasn’t reminded them of the regularity of average or poor returns on any investment, they may be setting themselves up for a much more painful fall in the long-term.

Are these trend lines conclusive? Hardly. Could the opposite argument be made? Certainly. The best and the worst thing about statistics is the ability of two different people to interpret them in drastically different ways.

To say that steady growth in the rate of price appreciation is dangerous would probably be real estate heresy. It’s still worth examining the notion, though. It’s very possible that markets which make their investors feel the sting of a slow year fairly regularly, make those investors much more conscious of the reality of the environment, and make for stronger markets in general.

Sam DeBord is a state director for Washington REALTORS®, and managing broker with Coldwell Banker Danforth. Connect with his team, Seattle Homes Group, at SeattleHome.com and SeattleCondo.com.