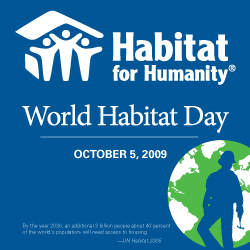 The United Nations has designated the first Monday each October as
World Habitat Day.

This year on Oct. 5, Habitat for Humanity is leading a global observance in Washington, D.C. and around the world,  to declare that the lack of decent, affordable housing is unacceptable. The theme for World Habitat Day 2009 is “Planning Our Urban Future.”

According to the United Nations, more than 100 million people in the world today are homeless. Millions more face a severe housing problem living without adequate sanitation, with irregular or no electricity supply and without adequate security.

Worldwide, more than 2 million housing units per year are needed for the next 50 years to solve the present worldwide housing crisis. With the global population expanding, however, at the end of those 50 years, there would still be a need for another 1 billion houses. (UN-HABITAT: 2005)

Habitat for Humanity seeks to raise awareness and advocates to change the global plague of poverty housing.