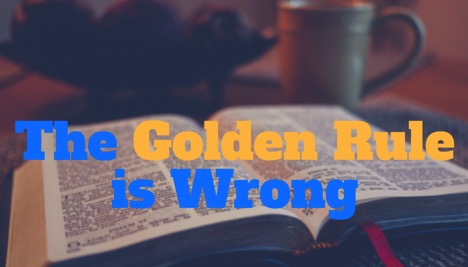 The Golden Rule: We all know it; we all grew up learning it in elementary school. “Do unto others as you would have them do unto you.” Or, in layman’s terms, treat others the way you would want to be treated.

While the sentiment behind the Golden Rule means well, I’m here to tell you that it isn’t the best rule to follow.

The Golden Rule is wrong — and it’s wrong in a very specific way. It doesn’t take into account the other people you are dealing with. It equates everyone as if they are the same. It doesn’t differentiate between extroverts and introverts. It doesn’t classify people based on their communication preferences. And, it assumes that everyone is like you.

Clearly, everyone is not like you. (If everyone was like you, the world would not have any issues or conflicts and everything would get done on time and in an orderly fashion. It would also be a bit boring.)

Would you treat an extrovert the same way as an introvert? Would you communicate to two people the same way if one responds quickly to texts and the other person likes talking on the phone?

Instead of the Golden Rule, use the Platinum Rule.

The Platinum Rule is better than the Golden Rule because it forces you to know the type of person you’re dealing with. To know how someone wants to be treated means you have to have to communicate with them and get to know them first. Just because you like to socialize and chat with people about their weekends before talking about business, doesn’t mean everyone else does.

The Platinum Rule philosophy tweaks the Golden Rule thinking in order to find out how the person you’re dealing with likes to be treated. If they are a straight-to-business person, you’ll want to think about adopting that strategy to best serve them and not yourself.

Some people may say that you would just be mimicking the other person if you adopt this strategy, and that people can spot a faker a mile away. I disagree. I believe if you get to know the other person before you do business with them, this puts you in the driver’s seat. You can control the conversations and the negotiations because you know how the other person will reciprocate.

Nico Hohman is the broker-owner of Hohman Homes, a residential real estate brokerage based in Tampa, Fla. Learn more about Nico at hohmanhomes.com or connect on Twitter: @thenicohohman.